The following bullet points summarize the crux of the matter or the underlying factors responsible for making Onitsha and many other developing countries’ cities places with air pollution problems:

The sad story of Onitsha and other urban centers in Nigeria with air pollution problems discussed below should be viewed against the background of the observations made by this blogger and the constraints listed in the National Environmental Sanitation Policy.

Welcome to Onitsha: the city with the world’s worst air

The Nigerian city has recorded the world’s worst levels of PM10 air pollution. But although the results are lethal, the problem is not taken seriously here.

Cooking fires and burning rubbish have contributed to record-setting levels of air particulates in Onitsha, Nigeria, according to WHO measurements made in 2016. Photograph: Hadassah Egbedi for the Guardian

Approaching Okpoko market through thick smog on the back of an okada (motorcycle taxi), the natural reaction is to cover your nose to protect yourself from the dust storm – but the effort is futile.

When a lorry zooms past, kicking up yet another red cloud of dirt, a trader turns the head of a sleeping toddler away from the road, a protective act that is as poignant as it is pointless.

This is a typical day in the southern Nigerian port city of Onitsha – which last year gained notoriety when it was ranked the worst city in the world for the staggering levels of PM10 particulate matter in its air.

PM10 refers to coarse dust particles between 10 and 2.5 micrometres in diameter, while PM2.5s are even finer and more dangerous when inhaled, settling deep in a person’s lungs. Sources of both include dust storms, gases emitted by vehicles, all types of combustion, and industrial activities such as cement manufacturing, construction, mining and smelting. Onitsha scores highly on most of the above – as do other rapidly growing Nigerian cities such as Kaduna, Aba and Umuahia, all of which also featured in the WHO’s 20 worst offenders for PM10s.

In Onitsha’s very busy Okpoko market, my air quality monitor registers 140 for PM10s and 70 for PM2.5s – all way over recommended healthy levels, but still nothing compared to the readings triggered in other parts of this densely populated commercial and industrial hub.

The entire vicinity of the market is perpetually dusty, as wood-sellers saw lumber into different shapes and sizes. The air here is made worse by all the fine sand particles that fly off the back of trucks as they visit one of the many dredging companies on the bank of the River Niger, just behind the wood market. 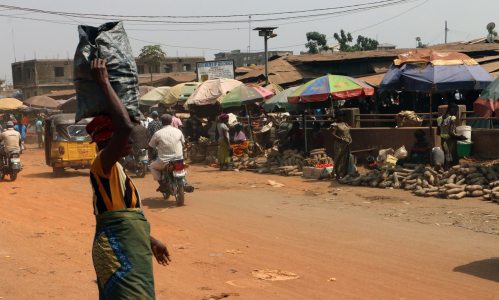 Some residents of Onitsha are unaware of the dangerous levels of pollution. Photograph: Hadassah Egbedi for the Guardian

One female traffic warden has been working in the same spot here for two days. How does she cope with the dust? “I am just doing my job,” she replies reluctantly. “Dust does not kill people.”

But she is mistaken. According to the United Nations Environment Programme (Unep), around 600,000 deaths throughout Africa every year are associated with air pollution, while an October 2016 report by the Organisation for Economic Co-operation and Development (OECD) suggested that polluted air could be killing 712,000 people prematurely every year across the continent.

The warden’s attitude towards this invisible but deadly threat is widespread among Onitsha’s residents – but not necessarily because they are nonchalant about their health. Most are simply unaware of the issue.

Some say they have more pressing concerns, such as how to feed their family. Others have simply become accustomed to living in a dirty and polluted environment.

Onitsha is grossly polluted – not just in terms of the air quality, but also the solid waste that litters the streets, blocking drainages and canals. With not a single waste bin in sight, heaps of unregulated rubbish dumps occupy roadsides and street corners.

Ikechukwu Obizue, a businessman in the neighbourhood of Nwangene, says residents can only do so much when there is little corresponding effort by the city’s government.

“Onitsha is quite dirty, but the government is not doing anything about it. We do environmental sanitation monthly, but then the city returns to being dirty,” Obizue says. “It is the government’s responsibility to keep the city clean, not the work of the residents – people in this city are too busy hustling to make an income.”

The air quality proves just as bad at Ochanja market, with PM10s registered at 586 micrograms and PM2.5s at 266. Yet in these highly polluted areas, few people show any sign of trying to protect themselves from the threat.

There are only a few air masks in sight. A good number of aluminium and copper recyclers are not wearing masks, even while smelting metal scraps. Worse still, most smelting activities are done in the open, releasing monstrous clouds of smoke into the core of the city.

At one of the few state-approved dump sites on Creek Road, Ikechuckwu works at a smelting workshop. He is sweating profusely as he sits on a pile of ash, taking a break from work. He explains he has been smelting iron for a little over five years – but says not to worry about his health.

“I know how to take care of myself,” he brags. “I am not wearing a nose mask because I don’t need it. I take medicine to cater for my health.”

Residents conduct a monthly cleanup, but the city quickly fills with waste again. Many locals blame government inaction for the problem. Photograph: Hadassah Egbedi for the Guardian

It is hard to determine to what extent these high concentrations of particles are affecting the residents of Onitsha, since there is no official data – but the health effects attributed to sustained exposure to PMs, especially PM2.5s, are well proven.

For a state government that can barely manage its waste disposal system, however, regulating its air quality appears a far-fetched aspiration. The now defunct Anambra State Environmental Protection Agency was widely criticised for failing in its responsibility to effectively tackle environmental pollution, and in its place, the Anambra State Waste Management Agency was created – with little effect.

The state’s Ministry of Environment, Beautification and Ecology did not respond to the Guardian’s questions regarding air pollution in Onitsha.

Tipping point: revealing the cities where exercise does more harm than good

In at least 15 cities, air pollution has now become so bad that the danger to health of just 30 minutes of cycling outweighs the benefits of exercise altogether, according to new research.

“The major problem is that we don’t take air pollution seriously in Nigeria,” says medical practitioner Dr Nelson Aluya. “As the population increases and we become more industrialised, we ought to have active air-monitoring agencies and a federal environmental protection agency. We say they are there – but are they active?”

In truth, air quality monitoring and control is not on the radar of many African governments. Nigeria has a long list of environmental protection laws and regulations that are barely enforced.

“Even in the healthcare sector,” Aluya continues, “there is no standardised care to monitor those who have chronic obstructive pulmonary diseases resulting from exposure to bad air, and no standard procedure in hospitals to check for oxygen levels.

“So you see, we are in deep trouble. If we have not recognised the fact there’s a problem, then how do we solve it? Unfortunately, people will keep dying as stakeholders remain nonchalant.”