A statement that Africa is sitting on a sea of groundwater  reserves seems sensational and sounds like what one reads in newspapers that want to generate sales but coming from Reuters which quotes British Geological Survey scientists, it becomes a statement that one cannot wave away.

The statement  in the article posted below is about North African countries such as Libya, Egypt, Algeria and Sudan. It will be interesting to know if the statement is based on enough data points even for this part of Africa.  If they do, this is welcome news.  Does this statement hold for other parts of Africa?

Data on groundwater in Francophone countries may be adequate for making sweeping statements on the status of groundwater but the situation is not the same in Anglophone countries. In the latter, e.g. Lake Chad Basin, there are gaps and the reliability of available data is questionable.

A statement about Northern Nigeria with respect  to failure of irrigation schemes being due to fuel cost may not be wholly correct. Currently, failure of water schemes in Nigeria is due to two key challenges:  corruption and poor maintenance culture.

When this blogger carried out a survey of abandoned boreholes in Northern Nigeria  in the early Eighties for the Federal Government, it was found that  boreholes were abandoned mainly as a result of poor maintenance and “ghost boreholes” which were boreholes that existed only on paper but were never drilled due to corruption.

Why is the hand pump very expensive – $13,000.00 a piece in Democratic Republic of  Congo (DRC)?  If I buy hand pumps in Nigeria where they sell for under $800 (eight hundred dollars) and sell in DRC, I will be raking tremendous profits!

Going by this finding, if donor agencies work hand in hand with African countries with respect to extensive and intensive mapping of African aquifers,  we may even find more than a sea of groundwater reserves under a substantial part of Africa; we may find ocean of reserves!!! 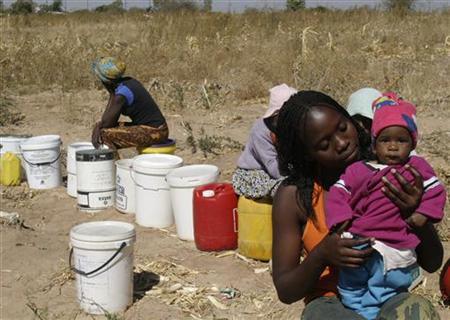 (Reuters) – Huge reserves of underground water in some of the driest parts of Africa could provide a buffer against the effects of climate change for years to come, scientists said on Friday.

Researchers from the British Geological Survey and University College London have for the first time mapped the aquifers, or groundwater, across the continent and the amount they hold.

“The largest groundwater volumes are found in the large sedimentary aquifers in the North African countries Libya, Algeria, Egypt and Sudan,” the scientists said in their paper.

They estimate that reserves of groundwater across the continent are 100 times the amount found on the its surface, or 0.66 million cubic kilometers.

Writing in the journal Environmental Research Letters, they cautioned, though, that not all these reserves can be accessed.

Where they can, small-scale extraction using hand pumps would be better than large-scale drilling projects, which could quickly deplete the reservoirs and have other unforeseen consequences.

Groundwater is no panacea for Africa’s water shortages but it could form an important part of a strategy to cope with an expected sharp increase in demand for water as the continent’s population increases.

Even now, some estimates put the number of Africans without access to safe drinking water at more than 300 million and only 5 percent of arable land is irrigated.

“It is not as simple as drilling big bore holes and seeing rice fields spring up everywhere,” said Dr Stephen Foster, a London-based senior adviser for aid group Global Water Partnership and an expert in groundwater issues.

“In some places it could be economically and technically feasible to use groundwater to reduce crop loss, but I would question whether that is true everywhere. It will need detailed evaluation.

Foster noted that projects have failed due to cost and logistics problems.

“In northern Nigeria there have been groundwater irrigation projects that have failed because of the rising cost of fuel – a major factor in drilling costs – and distribution difficulties.”

The researchers say some of the largest deposits are in the driest areas of Africa in and around the Sahara, but they are deep – at 100 to 250 meters below ground level.

“Water levels deeper than 50 meters will not be able to be accessed easily by a hand pump,” said the study, led by Dr Alan MacDonald of the British Geological Survey. “At depths greater than 100 meters the cost of borehole drilling increases significantly due to the requirement for more sophisticated drilling equipment.”

The amount of water a borehole yields is another key issue. A small community hand pump needs a borehole with a flow rate of 0.1 to 0.3 liters per second. For large-scale irrigation, the rate needs to be much higher, say around 50 liters.

Phoebe White, a water, sanitation and hygiene specialist for the UK Department for International Development based in Kinshasa, Democratic Republic of Congo, said hand pumps in the DRC cost up to $13,000 apiece but in some areas the aquifers are too deep and other pumps must be used.

In areas of DRC where drilling deep boreholes is required the cost can be around $130,000, although problems of accessibility and infrastructure can push that figure up, according to White.

The researchers say the maps, based on existing geological charts from governments and hundreds of aquifer studies, are aimed at promoting a “more realistic assessments of water security and water stress”.

Roger Calow at UK think-tank the Overseas Development Institute, which was involved in the program that spawned the research, said the paper shows water shortages in large parts of Africa do not stem from scarcity.

“What the science is telling us is that we have more storage in these shallow, relatively unproductive (aquifers) than we thought,” he said, adding that about 60 percent of Africans still live in rural areas and 80 pct of those rely on groundwater systems.

Calow said a third of hand pumps across Africa have broken down due to a lack of maintenance.

“The discovery of substantial water reserves under parts of Africa may well be good news for the continent but it may prove hard to access in the near term and, if not sustainably managed, could have unforeseen impacts,” Nick Nuttall, spokesman for the United Nations Environment Program (UNEP) in Nairobi.

Nuttall said over-abstraction exploitation of groundwater in Mexico City, for example, is undermining the foundations of buildings.

He said the focus of efforts to improve water supply should be on better collection and storage.

“The fact is that there is already a tremendous amount of water available for Africa but it is rarely collected”.

A study by UNEP and the World Agroforestry Centre found there is enough water falling as rain over Africa to supply the needs of some 9 billion people.